How To Make Money With A Blog from Christian Personal Finance 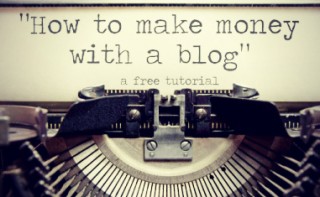 
In 2 years I went from not knowing what a blog was to making more money blogging than my day job.

The purpose of this article is to show you how to make money with a blog. I suspect most people won’t stick with it long enough to make a full-time income, but even making an extra few hundred dollars a month isn’t too bad either (here are 23 other ways to make money as well).

This article is extremely long (more like 10 articles), but I wanted it to be a thorough and helpful resource for those wanting to start a blog or make some more money from the one they already have.

How it all started for me

About 2 years ago I was talking to a friend of mine about the idea of building websites full of free information to help people. After brainstorming a bit, I got a couple ideas of topics that I was passionate about: Proverbs and Personal Finance.

My first idea was to post a Proverb each day and comment on it. As I explained my idea further to him, he informed me that I would basically have a blog. I didn’t know what a blog was, but I thought, “oh, ok, sure.”

So, over the next few weeks I read as much as I could find about blogging and ultimately decided on creating a blog about Personal Finance from a Christian perspective. I had been very interested in helping people with their money, so blogging seemed like a great way to reach people all over the world.

Over the next couple months, I started writing articles and officially launched ChristianPF in June of 2007. At this point I had thought about making money from the site, but had no idea how and honestly didn’t really think it was possible to make a living at it. I threw up an Adsense ad just to see what would happen and I still remember how excited I was when I saw that I had made my first 7 cents!

From there, I set a goal to make $100 by the end of 2007 which was pretty easy to accomplish – even without knowing anything. I should also mention that from June 2007 to June 2008 I spent about 4-6 hours each weekend writing articles and averaged about 4 new articles each week. And I spent a few more hours each week on site maintenance, emails, social media, etc. So in total I probably was spending about 10 hours each week working on the site.

In July 2008 things got interesting. The large brokerage firm that I had worked 5 years for was bought out by a larger firm. I was told that my department would no longer be needed, so they handed me a severance check and I was on my way. By this point I was making some money from the blog, but not enough to even pay the rent each month.

After much prayer I decided against looking for another “day job” and decided to work full time on building the blog. Thankfully we had paid off most of our debt, and had my wife’s income as a support to buy us some time. I figured I would give it a shot for a few months and if it didn’t work out I would find another 9-5. From that point, the income generated from this website has increased each month and in February 2009 it exceeded my monthly income from my old day job.

I am still a little bit in awe and can’t believe that I am actually paying the bills from this website!. But, I thank God everyday that I get to do this – I really did not like working in Corporate America and am so thankful! It is hard work, but it doesn’t really seem like it when you are doing something that you are passionate about and love doing it. To read more about blogging click on the article link: http://christianpf.com/how-to-make-money-with-a-blog/.