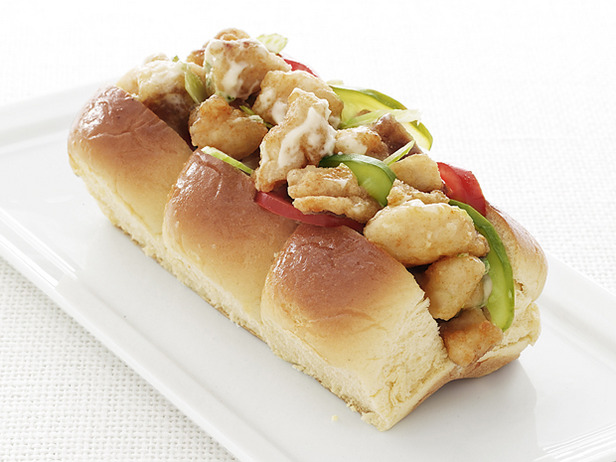 Heat about 2 inches of oil in a heavy-bottomed pot over medium heat until a deep-fry thermometer registers 350 degrees.

Combine the jalapeno, scallions, mayonnaise and pickling liquid in a blender; puree until almost smooth. Season with salt and pepper.

Place the flour in a bowl and season with salt and pepper. Dredge the catfish in the flour; shake off any excess in a strainer. Working in batches, fry the fish until lightly golden and just cooked through, about 1 minute. Remove from the oil with a slotted spoon and drain on a paper-towel-lined plate; let cool. Preheat the broiler.

While the fish cools, divide the buns into four 3-roll rows (they'll look like hot dog buns). Split open down the center; brush the tops and insides with the melted butter; broil until golden, 1 to 2 minutes.

Toss the fried catfish with the spiced mayonnaise; divide among the buns. Garnish with tomato, pickles and celery.