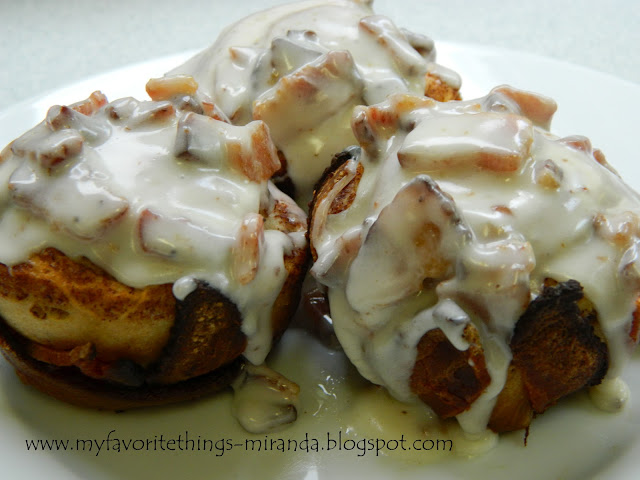 Heat a skillet over medium-high heat. Place bacon strips in skillet and fry for 2-3 minutes until still soft but slightly cooked. Remove bacon and pat dry with paper towels.  Crumble 3 pieces and place in a small bowl.

Remove cream cheese from package and place in a bowl. Allow cream cheese to soften for about 15 minutes outside the refrigerator.


Measure out butter into a measuring cup and allow to soften for 5 minutes.

Combine cream cheese and butter in a large bowl with a hand mixer until the ingredients combine and start to cream.

Slowly add in the confectioner's sugar and beat until smooth and frosty.

Mix in the remaining ingredients until all ingredients are fully incorporated. Mix in crumbled bacon and place in refrigerator.

Pop open the can of cinnamon rolls and unroll them into long strips. Lay one strip of bacon on each cinnamon roll strip, then roll them back up. Place each bacon roll in a greased pie pan.

Cook according to package instructions.  Remove from oven and allow to cool for 5 minutes.

Frost with bacon and cream cheese frosting and serve. Enjoy!