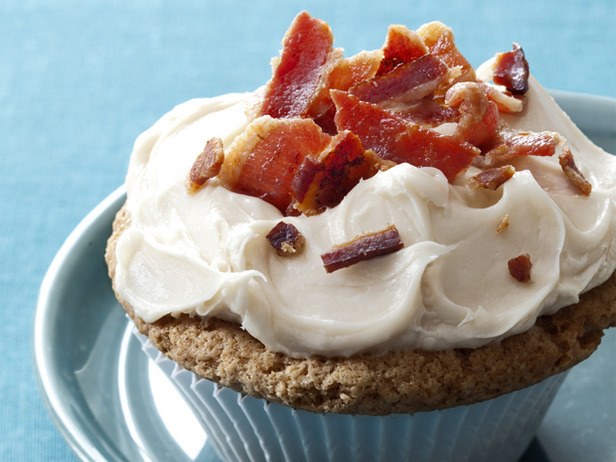 Preheat the oven to 325 degrees. Place paper liners in a 12-cup muffin tin. Prepare the cupcakes: Combine the flours, pudding mix, baking powder, potato starch, cinnamon, nutmeg and salt in a bowl with a whisk.

In a separate bowl, cream the butter and sugars with a mixer on low speed until combined, 6 to 8 minutes. Gradually mix in the vanilla and egg whites. Scrape down the sides of the bowl; continue mixing until light and fluffy. Add the flour mixture in 3 batches, alternating with the maple syrup and half-and-half, mixing after each addition and ending with flour. Mix until the ingredients are just combined; do not overmix. Fold in the bacon. The batter will be thick.

Pour the batter into the prepared muffin tin, filling each cup about three-quarters of the way. Bake until a toothpick inserted in the center comes out clean, about 40 minutes. Cool completely.

Meanwhile, prepare the glaze: Beat the cream cheese and butter with a mixer on medium speed until creamy. Add the confectioners' sugar, maple syrup and cinnamon; beat until combined. Spread on the cooled cupcakes; top with chopped bacon, if desired.