Skip to main content
Labels
Posted by Miranda May 26, 2012 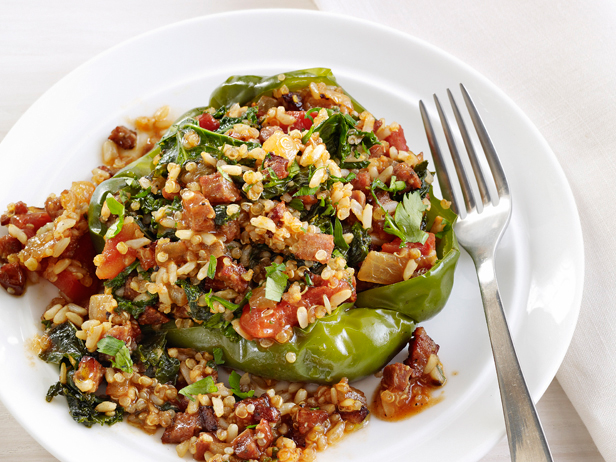 Bring a medium saucepan of water to a boil; add the brown rice and boil 10 minutes. Stir in the quinoa and cook until both grains are tender, about 15 more minutes. Drain well and set aside.

Meanwhile, drizzle the bell peppers with 1 tablespoon water in a microwave-safe bowl. Cover with plastic wrap; microwave 10 minutes.
Heat the olive oil in a wide saucepan over medium-high heat. Add the onion and cook, stirring, until golden, about 5 minutes. Add the sausage, garlic, thyme, allspice and 1/2 teaspoon salt and cook, stirring, until the sausage is brown and crisp, about 3 more minutes.

Divide the peppers among plates. Stir the grains into the kale mixture and season with salt. Spoon into the peppers. Top with parsley.
Recipe shared from: http://www.foodnetwork.com/recipes/food-network-kitchens/cajun-stuffed-peppers-recipe/index.html
Labels: Savory Main Dishes