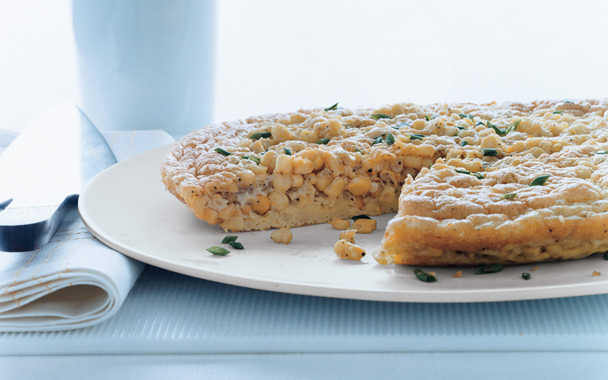 Add corn to a 4-quart pot of boiling salted water, then remove from heat and let stand, covered, 10 minutes. Drain and, when cool enough to handle, cut kernels from cobs with a sharp knife into a bowl, then scrape cobs over bowl to extract "milk."

Melt butter in a 10-inch ovenproof nonstick skillet (preferably lightweight) and remove skillet from heat, then transfer 3 tablespoons melted butter to bowl with corn (leaving remaining butter in skillet to cool). Toss corn to coat and stir in 1/4 teaspoon salt and 1/8 teaspoon pepper.

Whisk egg yolks with remaining 1/4 teaspoon salt and 1/8 teaspoon pepper in a large bowl until combined. Beat whites with a pinch of salt in another bowl using an electric mixer at medium speed until they just hold stiff peaks. Fold one third of whites into yolks to lighten, then fold in remaining whites gently but thoroughly. Gently fold in corn mixture.

Spoon mixture into skillet and bake until pale golden and set, 10 to 12 minutes. Loosen omelet with a heatproof rubber spatula and slide onto a plate. Serve sprinkled with chives.

Recipe shared from:  http://www.gourmet.com/recipes/2000s/2005/08/cornomelet
Labels: Rise and Shine So Good You Could Eat it Alone Side Dishes